RB Stone is a singer, songwriter and musician based in Nashville, Tennessee. 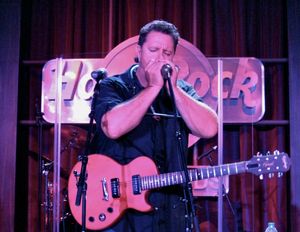 RB Stone’s parents were huge music lovers; his father, a blues/boogie, rock ‘n’ roller and his mother, a fan of Tennessee Ernie Ford, Janis Joplin, Herb Alpert, Johnny Cash, Sly and the Family Stone, Elvis and the wide variety of hits from the 60’s. At 12, his mother showed him some chords on the piano and Bill Withers’ hit “Lean On Me” was the first song he learned, which started the ball rolling in his long blues/boogie composing career.

Eighteen and just out of high school, music was still a dream that seemed to belong to others, so he hired on with the railroad traveling the Midwest with a 90-man rail gang four days a week. After two years he accepted an offer as an assistant manager at a plumbing, electric and heating store in Ohio, rose to the level of manager and accumulated a house, two cars, two trucks, and two motorcycles.

Restless at 23 RB sold everything but a truck, some harps and a guitar and headed to Colorado to be a cowboy and play music. There he met a horse trainer and lived on an Indian Reservation in Ignacio where he slept in a barn learning horses by day and teaching himself guitar at night. A few months later he got good enough at both and started getting hired by local outfitters to run back-country horse packing, wrangle horses and entertain the guests around the campfire.

Since those early beginnings, RB’s life and career have taken many twists, turns, bumps and bruises accompanied by significant accomplishments. Independent and flying under the radar he has 15 albums under his belt, toured 32 countries & 5 continents, sold over 40,000 albums most of them at his shows. He has a song catalog with Gwen Gordy of the Motown Dynasty at EMI. He’s had principal roles in national commercials, appeared in national music videos and his songs have been recorded by artists such as The Marshall Tucker Band. RB has worked with many major acts from Jazz Greats Hiroshima to The Charlie Daniels Band, has a 14 piece Roots Music Production Show featuring his songs, a Billboard Magazine Songwriting award, to name just a few of his achievements.

“He’s been called a Blues Cowboy, Country Bluesman, Americana Artist and Roots Rocker, and he answers yes to all.” 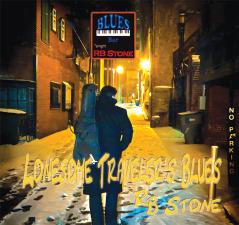 “Without a bit of background, the first listen to R.B. Stone’s Lonesome Traveler’s Blues rings with the authenticity of a bluesman who has been there and done that. Nothing is forced or contrived. This guy has been down all sorts of gravel roads, often face-first. Turns out this bluesman has a whole lifetime of Americana and country music in his background. He’s got a background as colorful as any mountainside spring day and songs that flow as strong as runoff of winter’s snow.

Every bit of this work – from Stone’s achy vocals to his honky-tonk harmonica solos to Glen Kuykendall’s slide guitar and piercing solos – rings with the legitimacy of life’s experiences. The ten original songs here come from Stone’s tenure as a worker on a traveling railroad gang, breaking horses on a Colorado ranch and leading pack tours into the Rocky Mountains for hunters and campers, various stints as a plumber and a rodeo rider, a worker in Hollywood doing commercials, and spending time entertaining military troops. Along the way, he recorded 15 albums.

The songs here are clever and sincere. They are genuine blues in the way Hank Williams wrote blues, not by following a chord progressions, but by following his heart. In “Fairweather Friends,” Stone laments that his friends only come to see him when the sun is gonna shine. “They want you when they need you/I don’t need what they want,” he wisely surmises. In “The Devil’s Satisfied,” Stone documents the tales of lives wasted on substance abuse. No surprise there, but the National steel of Kuykendall and Stone’s own acoustic are the perfect fit for the tenor of the song with an all too common ending.

There is so much talk these days about giving the blues room to evolve, but so few examples of how it can do so organic and logically. Stone’s work is a spark of inspiration at a time when even tried and true blues artists seem imprisoned by their own world and afraid to be anything other than what they’ve always been. It is doubtful that Stone ever thought of himself as a bluesman, but his songs reveal a very real, gut-level dose of blues. This is very good blues, played very generously from the soul.”
Michael Kinsman - Blues Revue 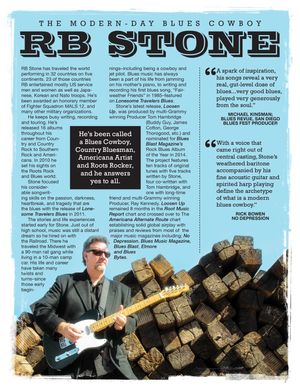 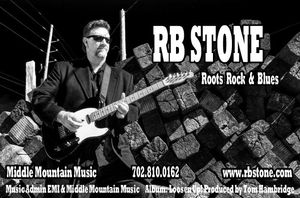 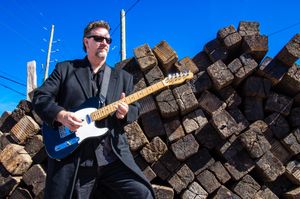 Click here for a hi-resolution photo of RB Stone. 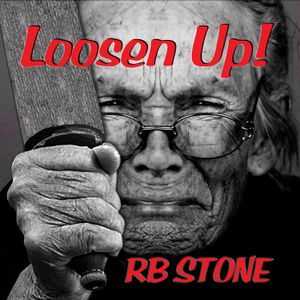 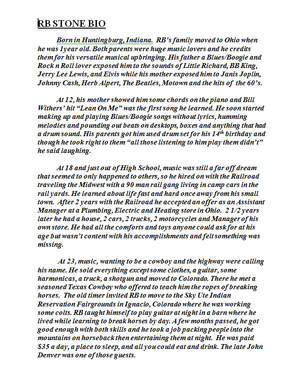 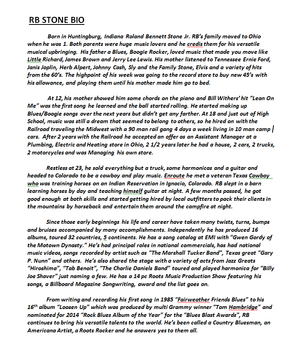